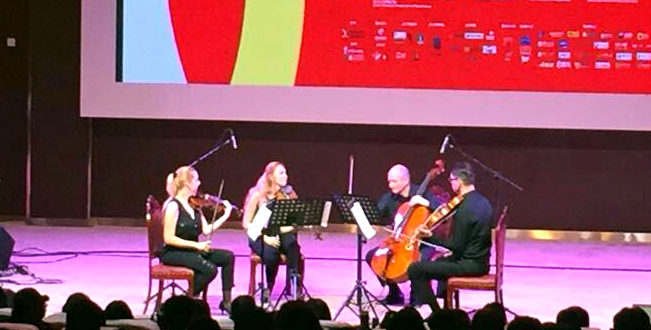 Concerts in Datong by Konikiewicz Trio, Royal String Quartet and Dagadana officially closed the Polish Circles of Art in China Festival.
Before the concert, representatives of the “Circles of Art Foundation” met with local authorities to talk about cooperation between Datong, a well known cultural centre in China, and Poland. The concert began at 17:00 local time at the Datong Demonstration Comprehensive Education Base – Multifunctional Theatre.

Wojciech Konikiewicz, Maciej Matysiak and Artur Lipski, who are Konikiewicz Trio, were the first to perform with a repertoire tested during previous festival concerts. What followed was the outstanding Royal String Quartet, with: Izabella Szałaj-Zimak, Roman Hoffmann, Marek Czech and Elwira Przybyłowska. The group proved their versatility and love of transcending boundaries: classical, jazz, popular and electronic music.
The second part of the closing ceremony began with festival director and founder – Wojciech Majewski, who in his statement was proud that the Polish Circles of Art in China Festival was so popular among audiences. It was also a time to thank Festival partners and sponsors.

Next played: Daga Gregorowicz, Dana Vynnytska, Mikołaj Pospieszalski, Bogdana Vynnytska, Marcin Taperek, Piotr Budniak and Bartosz Nazaruk, who are DagaDana! Their concert, full of humour, during which Chinese audience sang in Polish with the group “zasiać, zebrać” (to sow, to reap), proved that this is the kind of music which makes both audiences and musicians very happy. A combination of music for traditional and electronic instruments is Dagadana’s receipt for a musical journey between the Chines and Slavic cultures.

The closing ceremony in Datong was viewed online by 50 thousand people. From the data provided by our Chinese partner, all the festival events of the Polish Circles of Art in China Festival were followed by nearly 15 million people! These are joint values: concert turnout, livestream viewers and those following news on our website, WeChat and in local media.

We had a wonderful turnout on our Polish poster exhibitions and large audiences on all the screenings of Polish cinematography masterpieces in the China Film Archive. There was great interest in lectures and workshops, and in the concerts of our festival performers, in all the cities we were hosted in.

Numerous proposals of cooperation and a will and need to tighten those already existing Polish-Chinese relations, underlined by the hosts on every step, by far proved that this was the first, but not the last edition of the “Polish Circles of Art in China Festival”.